In the report that the monthly German history magazine P.M. History dedicated to Hansa, the cog could not be missing, the most representative ship of the Hansa, the  shipping and mercantile league society that dominated the maritime trade of northern Europe between the XIII and XVI centuries. The Hanseatic League was founded by the seafarers and merchants from the port cities of Germany (Lübeck, Bremen, Hamburg, Wismar, Stralsund, Danzig ...), who established an alliance. The cog was an innovative ship. It didn´t use oars for navigation and incorporated the rudder, the first that was attached to the hull structure. It measured between 15 and 25 m in length, and 5 to 8 m in width. It was powered by the deployment of a large square sail and the largest cogs could carry up to 200 tons of cargo. The materials that it most often transported in its traffic through the North and Baltic Seas were leathers, wood, resin, amber, salted fish and cereals. Thanks to the cog´s innovations, Lübeck and Danzig stood out as shipyards that manufactured and exported it to Mediterranean ports. P.M. History entitled the infographic: Für Profit und Krieg (For Trade and War), which kept the scheme and elements of the original infographic.
Page(s): 24-25 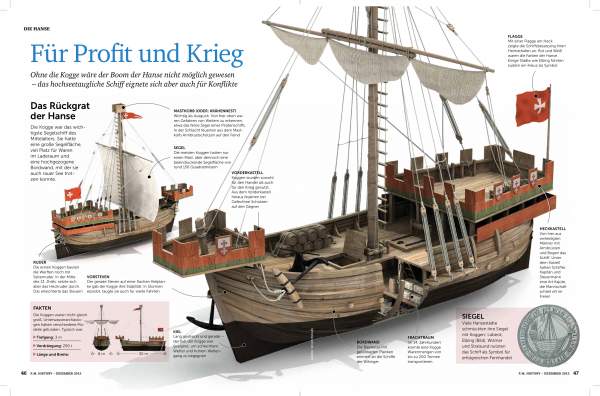