The German history magazine P.M. History chose this planimetric view of the Inca citadel of Machu Picchu to illustrate the most advanced civilization in the southern hemisphere. Built in the 15th century at 2,430 meters above sea level, between peaks of the Eastern Andes mountain range, in the Peruvian region of Cuzco, the "lost city of the Incas" was "rediscovered" by the American professor and explorer Hiram Bingham in 1911. Machu Picchu (in Quechua, "old mountain"), considered a masterpiece of Inca engineering and architecture, has been a World Heritage Site since 1983 and in 2007 was chosen as one of the Seven Wonders of the World.
Page(s): 44-45 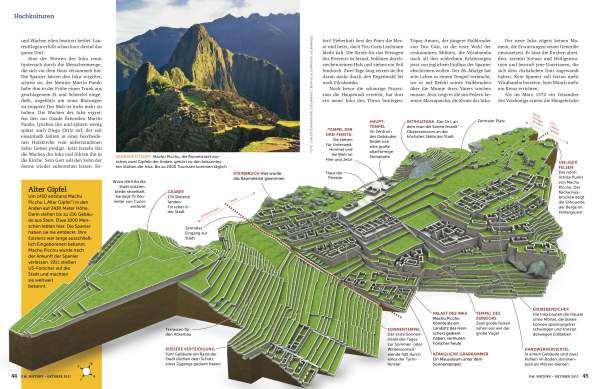