In an extensive report dedicated to the Order of the Knights of the Temple, the German magazine P.M. History offered the infographic titled Wie die Templer kämpfen (How the Templars Fought), which, made up of the sum of two elements from two different original infographics, mixed two styles of infographic design with excellent results. The Order of the Knights of the Temple was one of the most powerful Christian military orders of the Middle Ages. Founded in the Holy Land in 1138 or 1139 by several French knights at the end of the First Crusade, the full name of this religious-military institution was Order of the Poor Knights of Christ from the Temple of Solomon. Its primary mission was to protect the pilgrims who came to the Holy Land. The order was definitively approved by the Catholic Church in the council of Troyes, in 1129. Rich and powerful, it lost its influence after the failure of the Crusades and was persecuted by King Philip IV of France, who got the support of Pope Clement V for attacking and dissolving the order, accused of heresy.
Page(s): 44-45 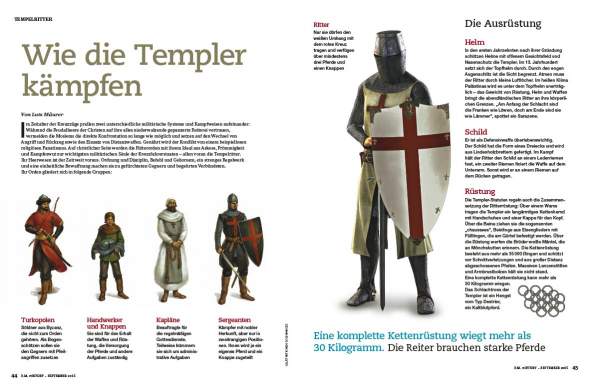